Where to Begin? A Rosh Hashana Yom Iyun

Join us for this special event and meet the faculty behind the Pardes Daily Elul Challenge! Whether you are keeping up with Pardes Daily or not, or plan to sign up for the next Pardes Daily challenge – join us for a deep dive into the fascinating texts of the Yamim Noraim (High Holy Days) to add a spark to your new year.

Schedule of the Yom Iyun

Tractate Rosh Hashana opens by teaching that there are four heads of the year yet in chapter two the word “Rosh”, head, is used to describe many other things not the least of which is an actual human head. What does the editor of the Mishnah want to teach us by using this literary play? How do human beings mirror the Divine in the revelation of Torah? How do the Rabbis of the Mishnah see their role in the rebuilding of Judaism post destruction? Through a careful read of a number of mishnayot in the tractate we try to answer these questions. This session is open to all both those who have been learning with the app and those who are joining us for the first time.

Rabbi Zvi Hirschfield
The internal and the external: Do mitzvot require kavannah?

Together we will examine the sugya in tractate Rosh Hashana that deals with a debate around the role of intention in the fulfillment of Commandments. We will also think about why this discussion takes place specifically in a section dealing with Rosh Hashana and Shofar.

One of the great spiritual successes of Biblical history is surely Elijah’s showdown with the prophets of Ba’al in Kings 1:18. But in spite of his overwhelming defeat of these charlatans, Elijah’s triumph is soon revealed to be a stinging failure. In many ways, his arc parallels that of Jonah, who follows him by more than a century. In this class, we will consider some of the intriguing connections between these two fiery figures, who both end their prophetic careers wishing to die. 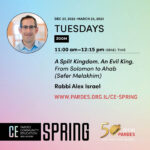 A Split Kingdom. An Evil King. From Solomon to Ahab (Sefer Melakhim)