Moving remarks Gary Carmell shared in memory of Roneet z”l at Pardes on May 6th, 2019

YOU ARE HERE: News » Moving remarks Gary Carmell shared in memory of Roneet z”l at Pardes on May 6th, 2019 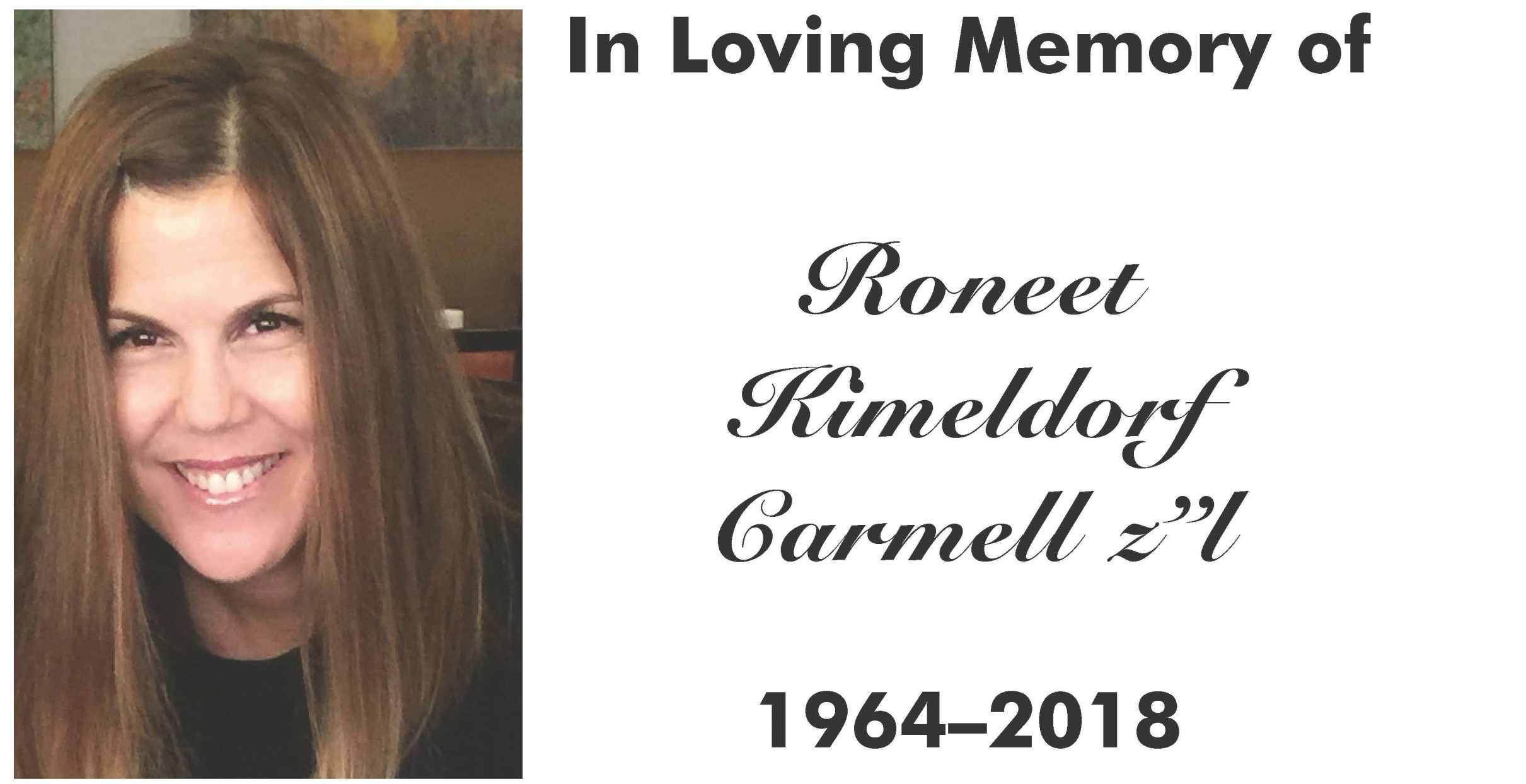 With Love and Gratitude from Gary Carmell

May 7 would have been my 30th anniversary with Roneet. We met towards the tail end of her senior year at UCLA. I was one year younger and we met there when we lived across the hall from each other in a small apartment building. After she graduated she moved back down to Orange County, California where she grew up. The problem for her was that I grew up in Chicago. She said that if I wanted us to stay together then I would have to move to Orange County because she wasn’t going to go to Chicago. I thought about it, and being the strong willed person that I was, I said “Of course I will move down to Orange County.” I was putting my fate and future in Roneet’s hands as I knew no one in Orange County and had no connections for potential employment. This was of no concern to her as she had faith in me and in us and she was a risk taker when her gut told her to go for it. She subscribed to Maimonides’ philosophy that “The risk of a wrong decision is preferable to the terror of indecision.”

Roneet asked me what I wanted to do and I said I wanted to work for an investment management company and manage stocks and bonds. She told me to go to a business area of Newport Beach with my resume, find such businesses, and leave my resume with them. The first building I went in showed on its list of tenants a company called Clayton, Williams & Sherwood, Inc. which was located on the 4th floor. Next to its name it said “An investment management company”. Aha. I saw my target and I headed right to the elevator and pressed the button for the fourth floor. I exited the elevator, turned right, entered suite 400, and immediately asked the receptionist if they were hiring and she said she thought they were. I wrote on my resume “Interested in a financial analyst position” and left it with her. My initial adrenaline rush soon dissipated as I went around to a few other firms and was shot down one by one by each receptionist with whom I came in contact and was increasingly embarrassed and deflated with this repetitive rejection. I felt quite silly and quickly concluded that it was futile trying to find a job this way.

I returned home and told Roneet how lame her idea was and how humiliating I felt and that I would never get a job that way. I was not a very happy camper with her, but more so with me for falling for her shenanigans. Much to my surprise, however, a week later I got a call from an H.R. representative of the first firm I went to and she said they wanted to interview me at CWS. I asked them what CWS did again and she said “Real estate,” and I said “I’ve always wanted to be in real estate.” That was in 1987 and I am still with CWS and one of the partners in the firm. I was so fortunate to find such a great company to work for with people who are some of my closest friends and partners that have been incredible to work with. And I owe it all to Roneet.

Roneet always pushed me to strive for more and to be constantly improving. In the words of another great Jewish philosopher, Bob Dylan, “He not busy being born is busy dying”. Roneet was the embodiment of this. She was never satisfied with the status quo. Warren Buffett said that the most important decision you will make in life is who you marry and in my case this was absolutely true. Roneet elevated me.

We built a life of tremendous connection, friendship, love, and so much fun. We had two kids together, we built a great life, and I was so lucky to have found her. I grew up in the suburbs of Chicago in a predominantly Jewish upper-middle-class area. What was interesting was that being Jewish was the norm which obviously is not typical in the United States as the Jewish population is quite small on a percentage basis. Because that was the case, being Jewish was generally taken for granted and one’s participation in Judaism was more out of obligation and checking the box and doing what was right for social purposes than any deep religious or spiritual connection to Judaism.

After I met Roneet I became very close to her family and her parents, who are Sabras. I had never been to Israel until after we got married. And it was life-changing as it is for so many people, particularly Jews. But to get to see it from the eyes of her parents and particularly her father, who is so deeply connected to his hometown of Nez Tziona, and the state of Israel and his deep well of friends changed me forever. I was able to see all of the fascinating historical aspects of Israel and, more importantly, the heart and soul of Israelis.

Barbara Tuchman, the late historian, used to say that Israel was the land of unlimited impossibilities, which I think is the best description of this remarkable country and people. Each time I return and see the progress here and learn about the contributions that Israel makes to the world the more proud I am and the more I want to come back. I have Roneet and her family to thank for that.

She was an Israeli and a Jew and an American through and through. She wore her heart on her sleeve. She was the kindest, nicest, and at the same time the toughest, most courageous person you could ever meet. She would give her heart and soul to anyone that needed it and was deserving of it. But she also had very high expectations of herself and others. She wanted people to rise up and face the challenges of life and she was going to hold you accountable to make sure you did so. Hillel said something that summed Roneet up beautifully. “A single candle can light a thousand more without harming itself.” She brightened everyone’s world that had the privilege of getting to know her.

Roneet was always there for others. She had a calling and that was to be a good friend, a wonderful daughter, a loving wife, an incredible mother, and someone who could do her part to repair the world. When we were in Poland last year we had the pleasure of meeting David Bernstein, who was our tour guide, and he brought to life Auschwitz and Birkenau and Polish life in the context of Judaism in a way that the was so deeply moving and interesting. David and Roneet really hit it off as both are so kind and giving.

When Roneet passed away unexpectedly a little more than six months ago I could no longer rely on her to push me forward. I was now on my own and I was determined to honor this beautiful, special woman. There were certain things that I wanted to do as we have been fortunate in life. I wanted to invest some of our resources to memorialize Roneet in the medical arena, by supporting Jewish life through places of worship in the United States, and to foster Jewish learning in Israel among non-Israelis. And this is where Pardes fits in.

I talked to David about ways in which we could connect Roneet to Pardes such that future participants would be able to learn a little about her while having her connected with the Yom Hazikaron/Yom Haatzmut ceremony each year. I thought this was so fitting as It honors the rebirth of the Jewish homeland. It represents the creation of one of the most remarkable countries and peoples in the history of the world, the chosen people. Strangers in strange lands finally able to return home.

As freedom is not free and liberation invariably comes with struggle, sacrifices have to be made. And that is why there is a somber aspect to this memorial. With that being said, however, it wouldn’t be a Jewish commemoration if there were not some celebratory aspect to it. We rejoice in what has been accomplished in this remarkable country and the unlimited possibilities that lay ahead. These holidays are the embodiment of Roneet as she felt so deeply as she could be moved to tears in an instant and in the next moment be the most joyful person in the room and celebrate with the best of them. We shed tears for the sacrifices that were required to bring about the creation of the state of Israel and we celebrate its rebirth.

Roneet loved life, she loved people, she loved her family, she loved being Jewish, and she loved Israel. For those reasons it is my honor to do my small part to support Pardes and honor Roneet on this beautiful day. Thank you for attending and being the first group of people to honor my late great beautiful wife and soulmate. I also want to thank the many members of Roneet’s family and friends who were kind enough to attend this ceremony as well.

Click here to learn with us in memory of Roneet z”l.