YOU ARE HERE: News » The 2017 Jewish Week of Constructive Conflict Teaches How to Talk Through Differences

After a year of global political upheaval, the fifth annual 9Adar: Jewish Week of Constructive Conflict (February 19-25, 2017) is being used this year by synagogues, schools, Hillels and Moishe Houses to address ever-growing contentious political divides and to attempt to build bridges within and between communities.

Through this year’s theme of Constructive Communication (tochacha), the 9Adar Project is working with individuals and organizations to promote healthy and constructive dialogue in the midst of divisive times. “Many synagogues and Jewish organizations are telling us that the 9Adar themes are more salient than ever, addressing divides and concerns within their communities in this political moment,” according to Rabbi Amy Eilberg, director of the Pardes Rodef Shalom Communities Program, a sister program of the 9Adar Project.

A major focus of the week will be the Break The Echo Chamber Challenge, in which participants are asked to analyze news from contrasting media outlets in order to learn about different perspectives. “One of the primary causes of the current political environment of destructive conflict is that people only read and trust news sources that reflect their own biases,” commented Rabbi Dr. Daniel Roth, founder of the 9Adar Project and director of the Pardes Center for Judaism and Conflict Resolution (PCJCR). “In order to truly create a culture of constructive conflict, we need to push ourselves to read, with an open mind, the news that is trusted by those with whom we disagree.”

Synagogues across the denominations will hold a variety of events throughout the week. Last month, clergy and lay leaders from the Union for Reform Judaism and the United Synagogue for Conservative Judaism participated in learning and implementation webinars on constructive conflict.

“The art of sacred and constructive conflict is more urgently needed than ever, as fiery disagreements surround us. We are so pleased to be able to engage our congregations with the Jewish Week of Constructive Conflict in these difficult times,” commented Rabbi Esther Lederman, Director of Communities of Practice for the Union for Reform Judaism, who is working to bring the project to over 100 congregations.

Rabbi Joshua Rabin, Director of Innovation at the United Synagogue of Conservative Judaism and partner in 9Adar, conveyed the urgent need for such programming: “Jewish communities need to lean into the tough conversations rather than avoid them. Teaching congregations how to engage in constructive conflict allows the synagogue to become a place where people learn to “fight fairly,” to love one another even after the dust settles from inevitable disagreements.”

Hillel International has also partnered with the 9Adar Project to create a special toolkit focusing on how to deal with some of the most heated conflicts taking place on campus, including the Israeli-Palestinian conflict and the new political climate in America. Moishe Houses around the world are also using these tools to help communities navigate contentious conversations.

Through the Pardes Rodef Shalom Schools Program, dozens of Jewish day schools and supplementary schools across North America are working with their students on how to engage in contentious topics, whether between fellow classmates or political adversaries. Toward this end, the #myfeetyourshoes 9Adar social media campaign provides five steps for engaging in constructive communication.

“We are excited to be interweaving materials from the Pardes Rodef Shalom Schools Program and 9Adar.org, ideas and activities about constructive controversy and communication, into PJA’s Taglit week of exploratory learning,” remarked Rabbi Y Chaiton of  Portland Jewish Academy,  Portland, OR.

“Marking 9Adar as the Jewish Week of Constructive Conflict lets students and schools affirm that what is learned from a long rabbinic tradition will be applied to contemporary living. Questioning, listening, articulating, recognizing varying needs and perspectives, building relationships and seeking solutions in a respectful manner are hallmarks of mahloket l’shem shamayim (disagreement for the sake of Heaven).  These same skills are needed to sustain community and civil discourse in democratic societies today,” commented Joan Vander Walde, Director, Pardes Rodef Shalom Schools Programs.

In Israel, the 9Adar Project, known as Dibbur Hadash: the Israeli Week of Constructive Conflict will be supporting over 100 events during the week through 37 community mediation and dialogue centers as well as a coalition of intra and inter-faith organizations. Dibbur Hadash is a joint initiative of the PCJCR and Mosaica: The Center for Conflict Resolution by Agreement. Over 20,000 people have already viewed the new Hebrew video “How do we argue?” launched to promote the week.

The 9Adar Project is an initiative of the PCJCR, part of the Pardes Institute of Jewish Studies. It recalls the tragic events that took place on the 9th of Adar some 2000 years ago when the initially constructive conflict between Beit Hillel and Beit Shammai turned destructive over sharp political and ideological differences, resulting in the death of 3000 students, according to some sources. “The day serves as a chilling wake up call to us all to strengthen our culture of constructive conflict so that we do not end up again engulfed in violence,” remarked Rabbi Dr. Daniel Roth.

To participate in the Jewish Week of Constructive Conflict, February 19-25, 2017, visit www.9adar.org/get-involved/. 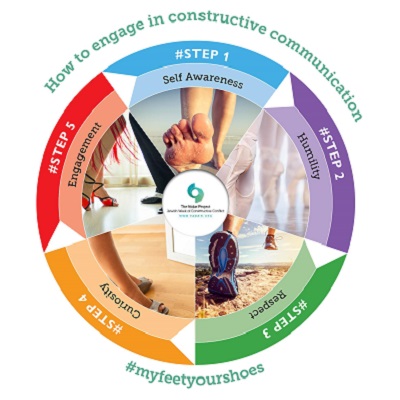