Rabbi Hazan Aliza Berger – My Life in the Pardes

Rabbi Hazan Aliza Berger’s Jewish journey led her to the Pardes Year/Semester Program.
Click here to learn more about the program, and consider signing up for the informational webinar on March 5.

It was a fully immersive experience at Pardes that Rabbi Hazan Aliza Berger sought when she enrolled for the 2011–2012 year. She was raised in an active Colorado Jewish Renewal community and dreamed of becoming an opera singer.

That particular dream proved elusive, and she consoled herself for awhile by singing loudly on the women’s side of the mechitza at the Orthodox shul she attended while in college.
An older friend from that shul encouraged her to attend Pardes, which she did after college. She threw herself into the experience and took on the role of a gabbai at the Pardes daily egalitarian minyan. She spent countless hours discussing sugiyot (passages of Talmud) and commentaries.

“I loved the community. It was an amazing group of people from all over the world. It was a special space,” said Aliza. 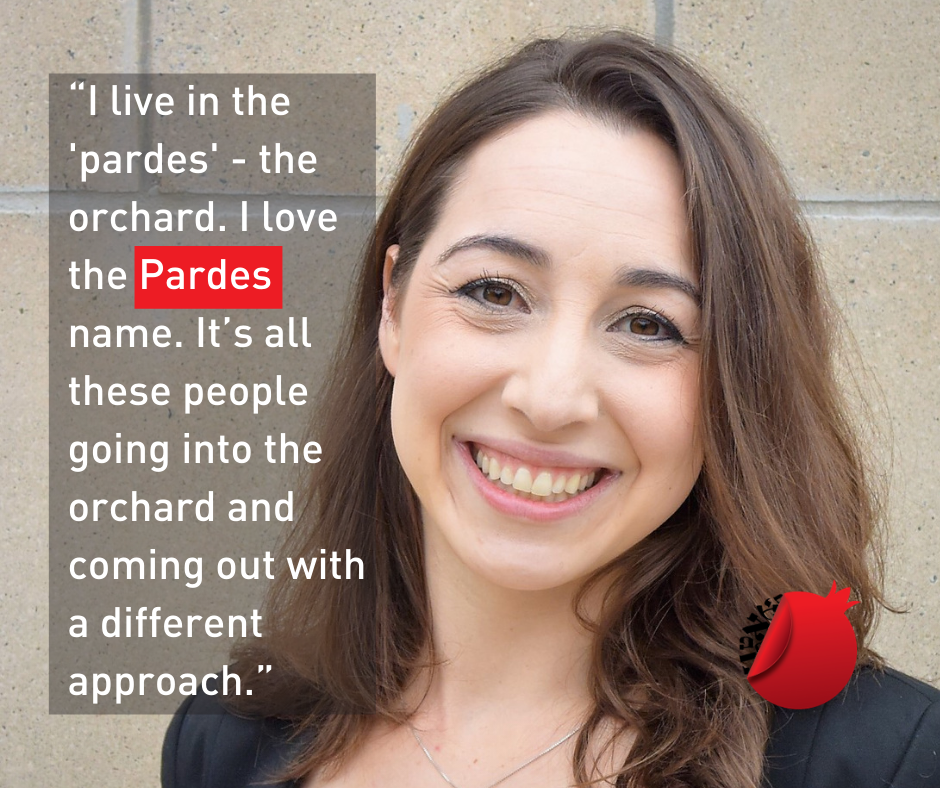 Aliza sought a more permanent Jewish community after Pardes. She decided to attend rabbinical school at Hebrew College in Boston, where she also worked in admissions for the cantorial school. That job led her to attend cantorial school herself, fulfilling an aspect of her operatic dreams.

Now she’s part of the clergy at the largest Conservative synagogue in New England, Temple Emanuel. Her job is to engage the approximately 500 teens in the community with social justice initiatives, sermons, pastoral care and as cantor during the high holidays.

“Given that, I’m a rabbi and a cantor and my work is community engagement,” said Aliza, “I live in the pardes,” using the Hebrew word for an orchard to describe her community. “I love the Pardes name. It’s all these people going into the orchard, and you come out different – you come out with a different approach.”

She uses her familiarity with pluralism and learning, skills she gained at Pardes, in her synagogue and community work.

“My work is very pluralistic. I work with young people who are religious and those who are very secular and I design programs for everyone’s needs,” she said. “My life is about finding ways to make Jewish life wonderful and to connect with Jewish tradition. That’s very much the work Pardes is doing. The experiences in the pluralistic community are something I learned to love at Pardes.”