David Ben Moshe: From Prison to Pardes – My Jewish Journey

David Ben Moshe’s Jewish journey led him to the Pardes Year/Semester Program.
Click here to learn more about the program, and consider signing up for the informational webinar on March 5.

For David Ben Moshe, once known as David Bonett (Year Program ‘17–’18, Summer Program ‘17), now 32, the introduction to Judaism came when he was in prison. He was serving 30 months for selling drugs and was in the library during a five-hour lockdown.

“I saw a guy reading something in a language that I didn’t understand,” said David, whose parents, immigrants to America from the Dominican Republic and Belize, had raised him as a religious Evangelical Christian with a strong background in Bible reading.

His fellow prisoner Mitch was reading the weekly Torah portion with commentaries. The concept of different explanations and opinions on the Bible was hard to grasp for David, who had grown up in a religion that did not allow debate and assumed wrongdoing for anyone who disagreed with the Scriptures.

“The way I grew up with religion, it was, ‘this is what it means.’ There was no debate. And if you disagreed, that was wrong and you’re on your way to hell,” he said.

He couldn’t imagine having a religious life with different interpretations. 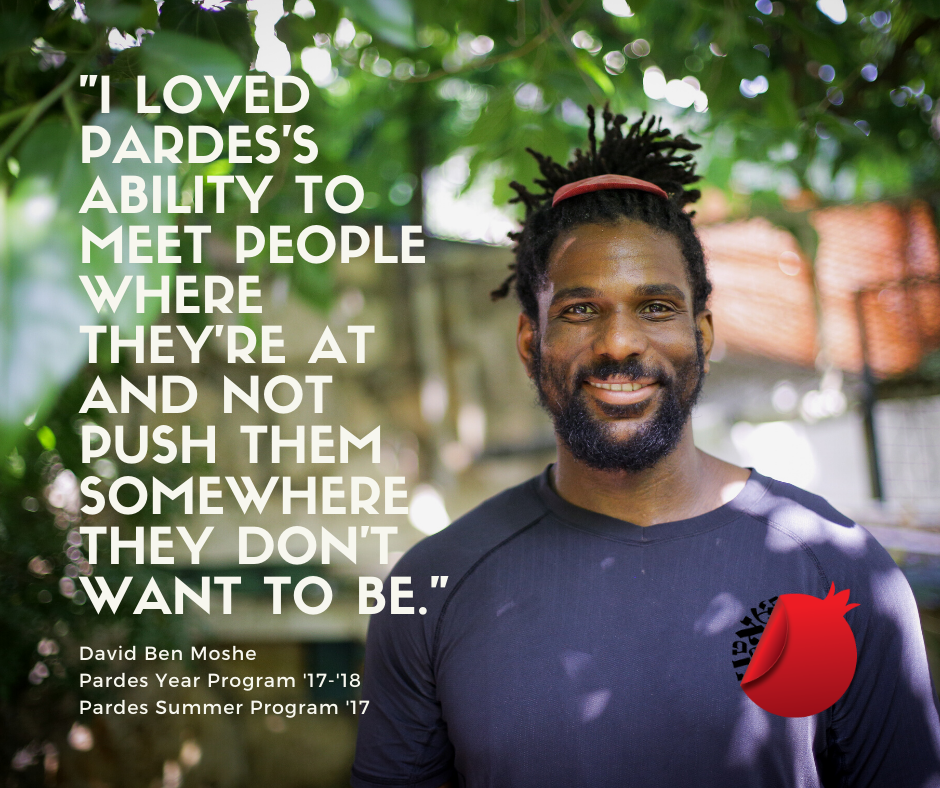 As David began studying Judaism, he found that it also had facets that were inconsistent, but offered reasoning and rationale.

He began studying with a Reform rabbi who visited the prison. He considered conversion but knew he wanted the stricter codes of Orthodoxy.

When he was released to a halfway house in Baltimore, his first requests for passes were to attend the local Orthodox synagogue for morning services and to speak with the synagogue rabbi about converting.

Five years later, David had converted and completed his college degree in exercise science at Towson. He had heard of Pardes from a friend and spent time there following a trip with Birthright Israel. He loved being in Israel and returned for the Summer Program and then the Year Program.

“I loved the ability to meet people where they’re at and not push them somewhere they don’t want to be,” he said. “I’m African American. I was in prison, and most of the Pardes people are American, white, post-college age, and they tend to be more accepting of different viewpoints. I just bring another perspective to this diverse place.”

During his first trip to Israel, he met his American-born Israeli wife, Tamar Gresser, whose parents also studied at Pardes. They married last year and had a baby this spring.

Now David is living in Beit Zayit, a community outside Jerusalem. He’s regularly in touch with his parents, who now come to visit every six months and have adjusted to the major changes in their son’s life.

“Here, despite my conversion, I’m just a Jew,” said David. “Here, people just know I’m religious because I wear a kippah and tzitzit and that’s more conventional than being an Orthodox Jew in the US.”