A Special Havruta One Decade Later

During these challenging times, we would like to highlight the power of the relationships that our students develop during their time at Pardes. After learning together at Pardes, our students forge relationships and friendships that extend far beyond their time at Pardes and help sustain them through all of the ups and downs that life has to offer. Read about this special Havruta and then visit the Year Program page to learn more and apply.

Havruta, the tradition of studying Jewish texts in pairs, is the very basis of learning at Pardes. At the same time, havruta has a special meaning for one particular set of haverim, friends, who met in the beit midrash more than ten years ago.

In fact, it was the art of learning in unison that came to epitomize their friendship.

The four were known as the “38 Tchernichovsky guys,” for the Jerusalem address at which they lived.

They came from different backgrounds, which was perhaps part of the initial attraction. 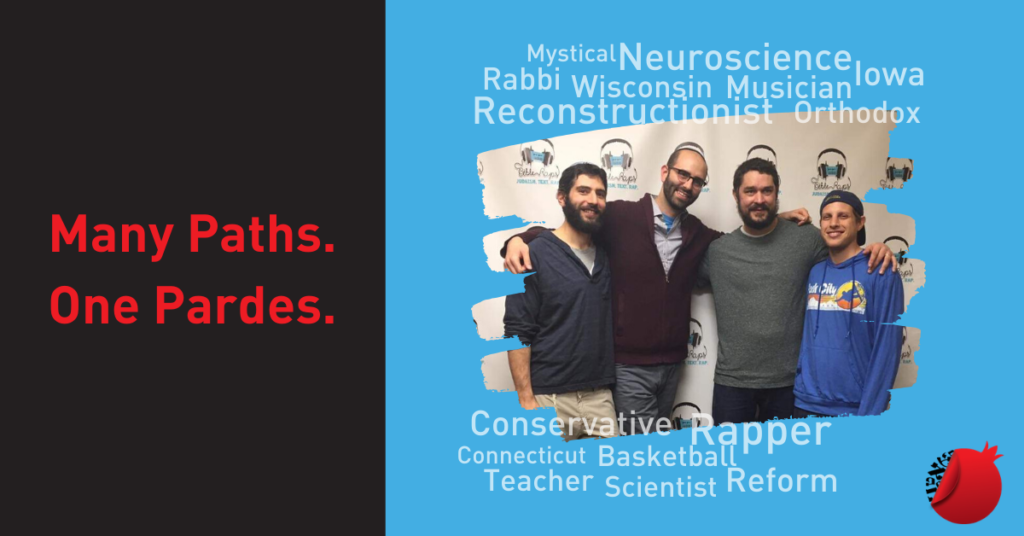 Ethan, now 34 and a Conservative rabbi at Park Avenue Synagogue in New York City, is from Madison, Wisconsin, from a family affiliated with the Conservative movement. He had already decided to attend the Jewish Theological Seminary for rabbinical school but wanted to augment his Torah study with some full-time text learning, which was what led him to Pardes.

Matt grew up in Iowa City, where there were few Jews. A musician and rapper, he had visited Israel ona Livnot U’lehibanot Birthright Israel trip, and was living in New York and teaching Hebrew school. There, he successfully introduced rap into a lesson plan, unintentionally creating Bible Raps, his educational company. He felt he needed some more intensive Jewish learning, which brought him to Pardes that same year.

AdAm Mayer, now an Orthodox rabbi, is the son of a Reconstructionist rabbi (his mother) and grew up in a religious home, but without much of a Jewish peer group in his Connecticut hometown. He chose to study at Pardes after attending Brandeis, when he was looking to spend time in Jerusalem.

David grew up in a Reform household, and it was during a group trip to Israel that he made his way to Pardes, where he fell in love with its openness and diversity. He came for a semester and stayed for a year.

While it was their mutual need for a living situation that brought them together, learning Torah as a four- person havruta became an essential element of their burgeoning friendship. They studied together all the time, in a ritual that became as familiar to them as deciding what to eat for dinner or whose turn it was to go to the grocery store.

“Our friendship was born in havruta and Torah,” said Ethan. “We would also go to the bar or watch Lord of the Rings, but since we were learning together, we would have dinner and talk about our learning.”

Their levels of Jewish learning differed from one another. David, currently a postdoctoral fellow in neuroscience at Hebrew University, often brought science to a discussion that included Matt’s poetry for an injection of the “wow and awe factor,” said David, while AdAm was “so knowledgeable and wise, and Ethan was an amazing leader.”

“Every group has these defining experiences, especially when first establishing the friendship,” he said. “For us, it was all learning together.”

There were other, memorable elements of roommate life as well.

AdAm remembers their weekly preparations for Shabbat, which often included a late morning basketball game for Matt and Dave and cooking in the kitchen with Matt playing the guitar in the background. They often invited fellow Pardes students over for dinner, as well as some of their teachers and families.

“We all had a transformative kind of year and we’re all very intimately connected to one another’s year, and these cornerstones of our spirituality consist of one another,” said Matt. “It’s a foursome element that has a unique energy.”

While they each came from different Jewish backgrounds, they found that Pardes offered each of them a voice in Torah, said AdAm. Torah was available to everyone, and the four of them internalized that sentiment.

“Everyone came with this open creativity and curiosity for learning and connecting,” said AdAm. “If you came home with questions about something you learned, it would jumpstart a whole conversation.”

Now, all these years later, it’s challenging to find the time and opportunity to learn together, but it still happens on occasion. Matt and AdAm are both married with families, and live in Philadelphia. They usually meet once a week to learn and record their podcast, “Rappers and Rabbis.” Ethan, also a creator of the podcast, lives in New York with his wife and child. David, currently living in Israel as a postdoctoral researcher, tries to visit as regularly as possible.

Occasionally, all four have Skyped together in order to learn. They agree that it is worth the effort, though they also agree that their learning is far different now than it once was.

Dave has a PhD and lives in Israel. Everyone is a little more interesting than we used to be, but the dynamic is still similar. AdAm and Matt are a little bit more on a mystical kick and Dave is a scientist. Sometimes it feels like we’re back in Jerusalem.”

There’s also a certain rhythm that can only be duplicated when all four are together, said Matt.

Learning is fundamental to their relationship and the learning takes on a broader definition the farther they are from the Pardes beit midrash, and more entrenched in their personal lives.

“We all really love learning Torah, and it’s something that is so essential to us as friends,” said David. “Every time we learn, it’s a way to access that place of sharing and discussing the most important issues in life.”