Reflections on the GA 2018 “Let’s Talk”: Can Israel and the Diaspora aspire to be not just two pillars, but an arch?

YOU ARE HERE: News » Reflections on the GA 2018 “Let’s Talk”: Can Israel and the Diaspora aspire to be not just two pillars, but an arch?

The GA 2018 in Tel Aviv was a dialogue on Israel and the Diaspora and the future of Jewish peoplehood being in danger. What does it mean that we are ‘Am Yisrael’ if the two largest Jewish communities of today don’t understand one another – whether literally due to language barriers or due to cultural misunderstandings of one another’s intentions? There seemed to be a consensus among the self-selected participants of the conference that we need each other. That we are stronger “together,” as Israel’s President Reuven Rivlin kept emphasizing in his speech at the opening plenary to large-scale applause. The question is: how can we be stronger together, and what do we need to do to make that happen?

This GA’s theme was “Let’s Talk.” There was a very special room called the Dialogue Den for sessions of hundreds, seated at tables of 10 for more intimate discussions. The opening session there was titled, “Stronger Together: Renewing the Covenant of the Israel and North American Jewish Relationship” led by The Wexner Foundation. The first thing that struck me when I walked in was that we were asked to seat ourselves by identifying as “Israeli” or “North American” – I was already stuck. I am “both.” (As the session began, we were given the option to identify as ‘both’ as part of a survey exercise, but we already had to seat ourselves as “either or.”) What does it mean that I am ‘both’? 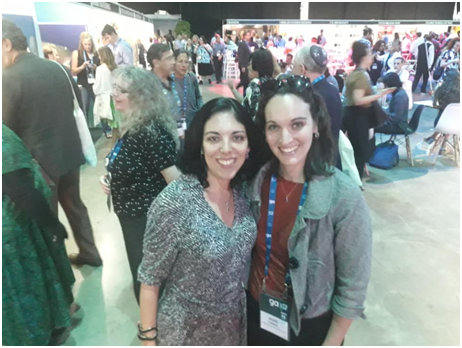